*Really* crappy cell phone pic, but the stack of three cats in apparently the best sunspot in the house at the moment was too cute not to share. In other news, I can’t use my desktop right now. 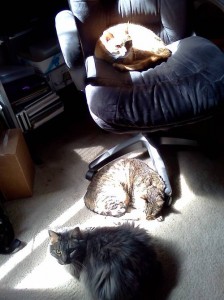 The cats pulled three different toys out of the toybox over the last couple of days. I’m glad they don’t have opposable thumbs.

Over 11,000 sexual assault kits, some dating back to the 1980’s, were found abandoned in a Detroit Police storage facility back in 2009.

Not long after the rape kits were discovered, Worthy pushed to start the processing with Michigan State Police.

So far, 1,600 rape kits have been processed, resulting in the identification of about 100 serial rapists and ten convicted rapists, according to Worthy.

Yeah, ok – the LEGO movie? Fucking brilliant. Go. See. Fun, action, and it’ll hit you in your feels. Now excuse me please, I have to go build something.

Don’t bother with Fable Anniversary – locks up every single time I play. Made it in an hour this time at least.